In short, it went opposite to expectations (in another sense), and I was not sure of even a top 10 rank by the end of it. (Warning:1500 words ahead)

The centre was approximately 7 km far away from my house. It was the same as my JEE Mains centre of September 2020, so I had a pretty good idea about the surroundings and the atmosphere. I had already planned, with my father, that I would eat pizza in the break because that is what makes me happy (and was also correlated with higher scores in mock tests).

So, the night before, I tried to sleep at 10 pm. I usually slept around 3 am in the preceding week, and adjusted my sleep cycle for JEE Advanced in just 2 nights. I fell asleep in about half an hour probably. Then, at around 4:30 am, my sleep just vanished, and I woke up just to see that I shouldn’t be awake at this time. I tried to sleep but failed miserably due to a disrupted circadian cycle. Soon, it was time to get ready, and I got out of my bed. Even though I couldn’t sleep properly, I felt fresh as it was such an important day of my life.

Everything was packed and ready the night before, so I had to just brush, wear a dress, and depart (who bathes on cold mornings;)). So, my father and I departed in a car. My pouch was loaded with sanitizer and different masks, 2 of my favorite lid pencils, and 4 handkerchiefs (2 for each paper). I was wearing a T-shirt from the DHRUV program with the IIT Delhi logo, and a pair of track pants. I sat in my seat by 8:15 am. Then started the long wait! Moreover, they removed the timer 30 minutes before the exam which made the wait even longer. I went to the washroom just 15 minutes before to be sure I would survive the whole 3 hours. The instructions screen opened up when I returned. Single +3 -1, Multiple +4 -2, Numerical +4 0. No new surprise.

Finally, it started. I went to Mathematics first; planned to complete it in 1 hour and hoped to not take more than 80 minutes. I started by attempting single choice and realized I was taking too much time. I skipped to multiple and left a third of them for review later on. The numericals felt easy and having integer answers for all of them helped. Additionally, I found 2 questions that I could solve easily using my arsenal of multivariable calculus and tensors, gaining those precious minutes.

I went to physics when about 70 mins were over. I found it much less calculative than maths was. The questions seemed near to the standard of the previous years. Single choice questions saved time here as they were conceptual. In the multiple-choice section , there was a question on a modified version of the Hall effect. I first calculated assuming positive carriers for current and concluded by symmetry that it should hold for electrons as well – ticked it and went on. But, before moving to the next question, I thought of verifying for electrons as well (because it was fun), and soon into the calculations, I realized that I was wrong :0 After calculating everything properly, I was still unsure. So, out of the 3 options which seemed correct, I marked ONLY 2 which seemed the most correct. Physics was done, except for that surface tension question, and about 60 mins were left.

Then, I started with chemistry and gained time with each passing question. I was cautious about multiple choice because -6 is disastrous. I slightly slowed down in numericals to be careful of the values. Nevertheless, I found it as easy as in previous years and Physical chem dominated slightly. I sailed through it within 35 mins. Time to go back to maths! I revised all the questions marked for review; some resolved, some stayed. I did maths for 20 mins and marked almost sure answers for each question. In the last 5 mins, I went to the surface tension question and argued whether the answer should be √14 or √7, both determined dimensionally. Finally, I marked √14 as it seemed cooler.

We were asked to return our scribble pads which made no sense as the instructions stated the opposite. I argued but to no avail. Finally, I had to forgo it. So, I do not have my Paper 1 scribble pad. I came back to the car and drank some lemonade. The pizza was cooked and we had to take it away. However, once my father tried to start the car, it did not start. He tried again and again, but it was of no use. Imagine the car not starting after such an exhausting paper! My father took an auto to Domino’s pizza and brought our lunch. I ate Kurkure, amla, and orange by that time. I had to stay in the hot vehicle with no AC and negligible wind. The whole time, I did not think much about paper 1 except that I felt it was easier than previous years’ paper 1s and was expecting a higher top score this year. Pizza came by 1 pm, and I ate 5 slices of a medium pizza and had some more amla in the end. I left by 1:40 pm to sit for paper 2. I was shocked to see that our seats were changed. That was such a gross logistical failure in the middle of a pandemic. I took my new seat, went to the washroom as per time, and waited.

The instructions screen was up 10 min before the exam. Again, not much of an unexpected marking scheme; single correct replaced by single integer. Paper 2 starts! I went to Maths having the same strategy as before. In the first 20 min, I could just answer 3 single correct which was quite a setback. I moved on to multiple, which were lengthy as well, so I marked some for review and went on to numerical. I saved some time in those as I found them much easier to calculate. By the end of 80 mins, I had about 7 questions for review in maths and switched on to physics.

The physics single integers were quite awesome, however, I couldn’t find exact answers for most. I skipped 4/6 of them and went on to multiple, which I sailed through quite easily. I also tried to take lower risks and did not mark any option which I was skeptical of, due to partial marking. Numericals took some time in calculation and even I was not sure about the answers which I calculated.

By the time I started chemistry I had only 50 mins. I found chemistry mostly easy. Physical chemistry seemed almost non-existent till numericals and I was able to complete it with 15 mins in hand.

Then, I went back to maths answering the questions marked for review. I was able to tackle most of them in the second pass, which felt great. However, a few remained and I don’t like leaving questions unanswered in any paper. Still, I resisted my temptation and tried to solve physics review questions. By the end, I had 3–4 problems whose answer I wasn’t sure of or had no idea. In the last 5 mins, I switched between those questions trying to solve them. I got an answer for one and tried the others until the time elapsed. I had attempted and gave the nearest possible by guessing, but I left 1 multiple blank in Maths which was the only question I did not attempt in both papers combined. Paper 2 ended; I submitted feedback. I found one of my answers was wrong a minute after the exam, which slightly stole my joy of submitting the paper.

Going back and beyond!

I went back to the place I was supposed to meet my father. The car was fixed. I got calls from my teachers about how it went. I couldn’t reply to them because my score in this kind of exam depends on how many silly mistakes I make, which is only revealed after the release of the answer key. When they forced me to give an estimate, I said a score of around 350–370 while being pessimistic at that time, as I was expecting a top score of 370 for that level of paper.

My final score in both the papers was

My total score is 352 and the positive score is 355 which shows how cautious I was. 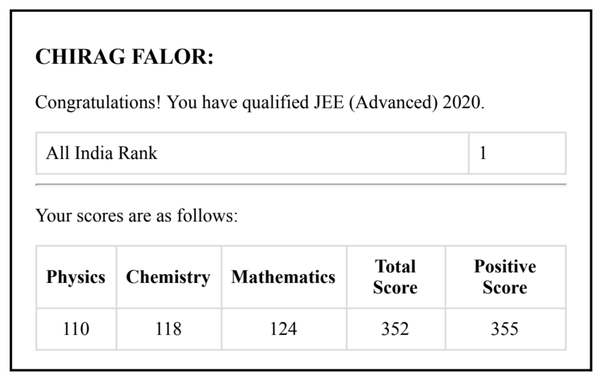 That rank which is neither composite nor prime still seems unreal.

A word of caution: This was just my experience and not any tips or model about how ideally JEE-advanced goes.